Life in Manchester is always changing, everything has a second chance, maybe everyone… The first industrial city in the world retains its history, its antique buildings and mills are alive as the fervent city. Today, most of them have other function than in the past, although they conserve their essence. 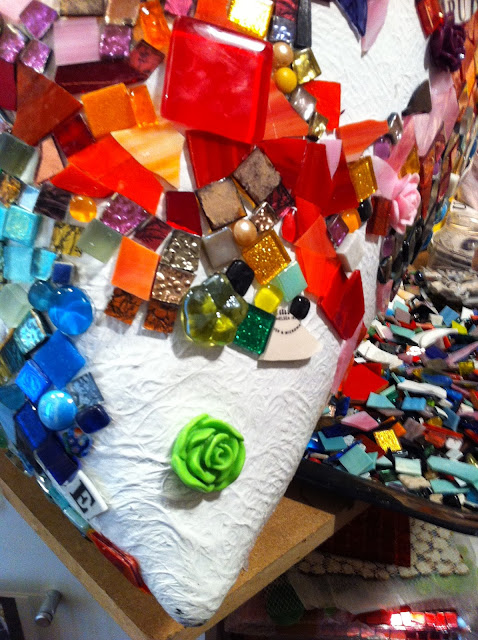 The Manchester Craft and Design Centre is a thrilling example. From 1873 to 1973, it was a Victorian fish and poultry retail market. The activity ceased in 1982 and Manchester’s City Council decided to convert it into Manchester Craft Village. An artists’ cooperative inside a special neighborhood which was re-named THE NORTHEN QUARTER by local creative people. In 2003, it became a non-profit limeted company; Manchester Craft and Design Centre. Currently, MCDC houses eighteen studios where it is possible to get hand-made products like jewellery, paintings, bags, ceramics, furniture, interior accesosories, etc. and most importantly : you can meet designers because they are working in their studies. Maybe, you might have a coffee with them in the Oak St. Café Bar and chat about their creations. What an amazing idea !!! Yes, this is Manchester; the industrial city converted into a design city, reaching into the future. 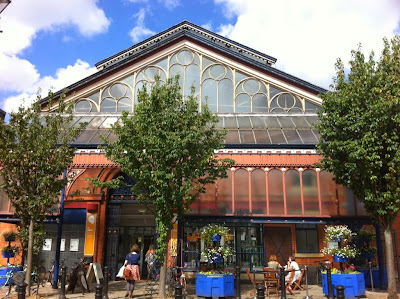 In one of these studios, sharing space and moments with Helen Tiffany (glass and jewelry artist) works Vivien Hamilton. Vivien has a BA Degree in Art, Craft and Design specialising in Textiles from Lancaster University. She also has a Master’s Degree in Education and during years she was a primary school teacher focalizing his teach in textile design. A few years ago, she worked as a volunteer at Didsbury Oxfam Shop, where her passion for mosaics was born. Nowadays, she works giving a new life to broken objects, a second chance to things that would be thrown away, sending them on a new journey. 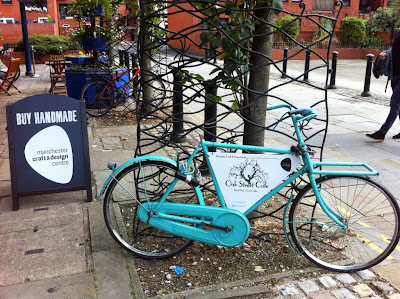 Vivien works in Direct Method Mosaic, she uses reclaimed pottery, broken corckery from Oxfam, stained glass, porcelain from cafés and restaurants, and bits and pieces that she picks up along rivers and streets. She sticks everything together creating mosaics on different surfaces as plastic and papier-mâché. Her most commons sculptures are based on human recycled torsos; actually they are old shop dummies that nobody likes. However, after her work, they are in demanded decorative pieces, for homes, hotels and businesses. 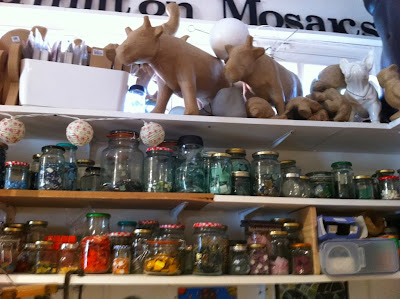 In spite of the fact that Vivien uses mainly plastic, she loves Composites. Her experience with our materials began this year. She bought three fiberglass half sized cows, after the Manchester Cow Parade in 2004. Finally, she has converted one of them into a special art work. Vivien told me that she can’t sell it, because it is her first experience with Compoistes and her first work at MCDC…. 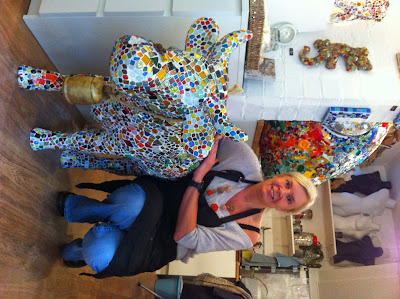 Aside form their durability and resistance to water, the main reason Vivien loves Composites is their lightless. “Composite is the best material where I have put my mosaics, that kind of surface is clean and it is absolutely easy to work on” she told me.
In fact, at the moment, she is working on a Blackburn Bee made in fibreglass. The project started in May 2013, and is being organized by the Blackburn with Darwen Council, Blacburn, UK. The goal is “to help to replenish the bee population in Lancashire”, which is in dramatic decline. According to Einstein, “If the bee disappeared off the surface of the globe, then man would only have four years of life left. No more bees, no more pollination, no more plants, no more animals, no more man”. 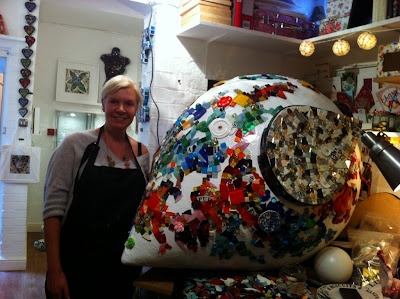 Vivien is collaborating with other artists for this cause, with her work in mosaics. In creating this exhibition like in CowParade, ElephantParade, etc. fibreglass is being used, in order to have several identical pieces, a mini-series taken from the same mould and decorated by different socially aware artists and designers.

Vivien, thanks for creating your amazing mosaics on Composites !!